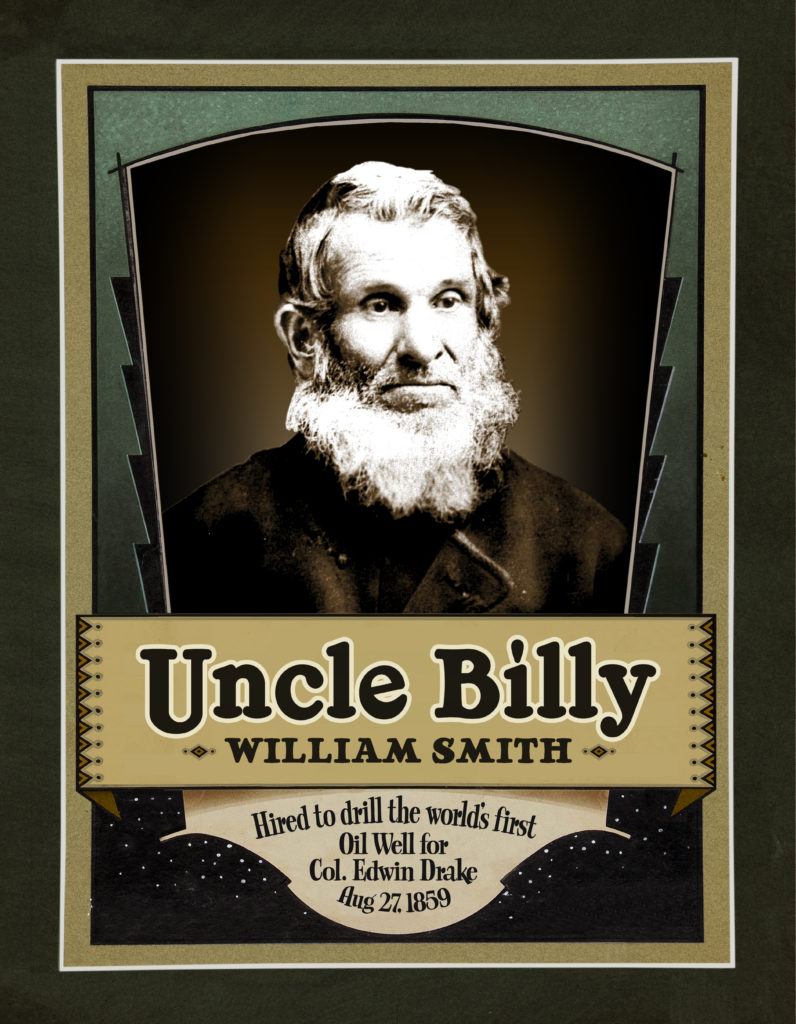 William Smith was born on his Grandfather’s farm near the headwaters of Little Buffalo Creek, at Hubb Run in Winfield Township, Butler County, PA on February 5, 1812.    About 1835 he married Jane Powell and they set up housekeeping. Together they raised 7 children, while moving to be near Billy’s work locations. “Uncle Billy” was a farmer, a blacksmith, and was skilled in mechanics. He learned the blacksmith trade in Freeport.  By 1850, he had moved his family to East Deer Township in Allegheny County where he drilled salt water wells.

While Billy was engaged drilling salt wells, Colonel Edwin Drake came to visit “Uncle Billy,” in April of 1859.  Drake had the idea of what he wanted to do, but he did not have the tools or the expertise to drill a well in his search for oil.  After being turned down by other men who thought his ideas were ridiculous, he heard about Billy’s work ethic, mechanical skills, and the tools he made to drill salt wells.  So he came to hire Billy, offering to pay him $2.50 per day, to bring his tools and come to Titusville. Billy assured Drake that he could make the tools needed, drill the well and guaranteed a positive outcome.   He was true to his word and was able to complete the well on August 27, 1859. When Billy went north to drill Drake’s well, he took his family with him and they lived in the engine house. His sons, James and William, worked with their father to accomplish the completion of the well.

While Uncle Billy was successful in drilling the well, he was also responsible for the first oil well fire in the history of the oil fields.  He went to the well to inspect the oil in the vat, carrying with him an open lamp. That lamp set the gases alight, burned down the derrick, all the oil that was stored there, his home, and the engine house. He moved his family into Allegheny Township, Butler County after the fire to keep them safe.  The structures were rebuilt and he worked there, pumping for Drake until April 20, 1862. He then returned to his farm on the south bank of Rough Run in Winfield Township, Butler County where his wife passed away in 1869, and continued blacksmithing and farming until he died on July 27, 1890.  His home is gone, but the foundation marks remain. The Hannahstown Cemetery became his final resting place where his grave remained, unmarked, for 62 years. On October 18, 1952, the granite obelisk that can be seen today was placed and dedicated to him and the skills he shared, the tools he made at his own anvil, used to drill the world’s first oil well.

Your ticket for the: Uncle Billy Smith