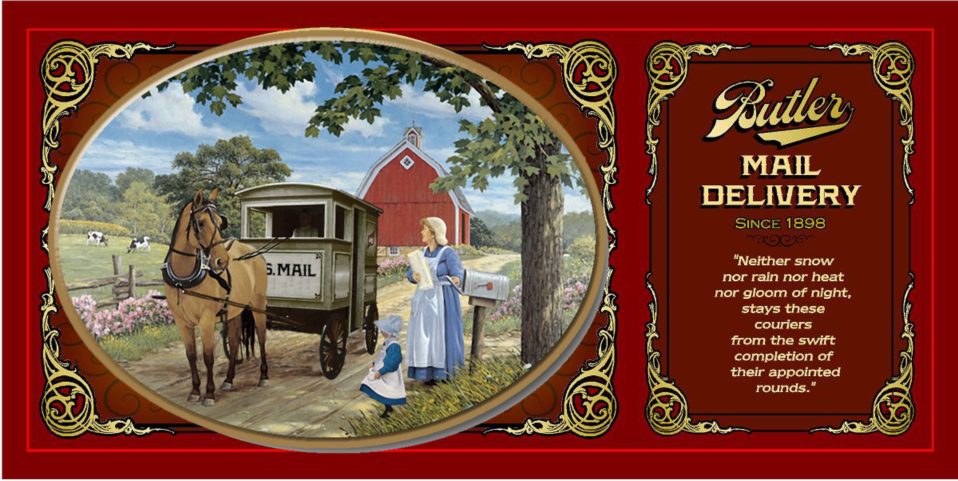 Throughout the years, one of the most important centers of society has been the community post office. Business transactions, family news, gifts, and personal correspondence have passed through it from faraway places. In 1896, five men on horseback set out to deliver mail along 10 miles of rugged rural terrain in the shadow of the Blue Ridge Mountains. What they accomplished that day was the beginning of Rural Free Delivery, opening the door to service for every American. Within a year 29 states were covered by 44 routes.

Until this time, American farmers had been very isolated from the outside world. Over 65 percent of Americans lived in rural areas in the 1890s. There were no radios, telephones or newspaper deliveries. The nearest neighbors were very often miles away. People had to travel into town to get any news or mail. Sometimes they had to wait for weeks to make the trip when the weather was poor.

In the early 1890s, the Indiana Grange President may have been the first to demand an answer to why rural customers did not receive mail delivery to their homes as city dwellers did. Farm families paid the same postage rates as those in the cities and they too began to complain along with other organizations that supported free delivery services to all. Congress was reluctant to act thinking the U.S. was too large for free rural delivery and would become a financial disaster. At that time, tax dollars supported the Post Office Department, although today, postal service operations are an independent business.

By 1895, due to complaints from farmers that the federal government and the mail-delivery system were discriminating in favor of the bankers, manufacturers, and city dwellers, who not only had their mail delivered once, but twice a day, Congress directed Bissell to spend $20,000 on a feasibility study and report during the next session on extending postal service throughout the country. Bissell refused to do so and resigned. President Cleveland then appointed the well-loved William Wilson of West Virginia, a former Confederate soldier, university president, and congressman to fill Bissell’s spot. In 1895, Congress made $40,000 in funds available, which was enough money for the Post Office Department to begin its Rural Free Delivery research. Wilson used the 1896 appropriation but the farmers still had to wait another six years for the beginning of the gradual implementation of Rural Free Delivery throughout the county.

It was not until 1902 that the Rural Free Delivery became a permanent service. By then there were about 8,500 rural carriers who sold stamps and money orders, and were considered traveling post offices. Carriers often purchased metal cash boxes to keep money and other valuable secure during their daily rounds. Cash boxes had storage compartments and shelves and could be secured with a padlock that had to be purchased by the carrier. These carriers also supplied their own transportation, usually horses and wagons or sleighs until 1929, when the Post Office acknowledged that roads had improved and allowed the rural delivery to change from horse-drawn vehicles to motor cars.

To be more successful and economical on the Rural Free Delivery routes, the Post Office often had to consolidate small, fourth-class post offices in favor of one post office that was able to operate as the headquarters for rural delivery clerks for the area. A fourth-class postmaster’s position was highly sought after in rural America. They were generally located in the Postmaster’s store. The job paid very little, but it drew trade into the Postmaster’s store and gave him standing as a town leader. In just a decade, Rural Free Delivery consolidations had forced the closure of over 18,000 post offices. At that time, most Americans living in rural areas welcomed the consolidations. They lost a post office but gained regular mail delivery, which was to them a happy exchange. The losers were the fourth class postmasters, who relied on the extra money and prestige. Since customers did not have to come into his store for their mail, people visited the city to shop, causing the country store to close and postmaster to find a new occupation.

In the fall of every year, forest fires crop up around the country. One-hundred years ago, Postmaster General Hitchcock offered the services of his Department to the Agricultural Department and its teams of forest rangers. At that time, the Post Office was the nation’s largest employers, employing 42,000 rural carriers and 13,000 contractors. Hitchcock issued instructions to his employees to work in cooperation with state and national forest officers, reporting any fires along their routes to local fire wardens. These postal employees covered distances of over a million miles of sparsely settled roadways on a daily basis. Fires in these areas may have festered without the postal employees reporting their existence. The assistance was helpful and the Department kept up that program for several years.

Before the founding of the Borough of Butler, a mail route was established through the district in 1801 that went from Pittsburgh to Erie. Once a month, mail was brought on horseback and partly on foot on this route. By 1805, mail was carried on that route twice each month and later twice each week.

After the road was built from Pittsburgh to Mercer, a wagon was used to carry the mail that passed through Butler. As early as 1818, a semi-weekly delivery had been started and in 1824, tri-weekly deliveries began.
Mail for Butler was put on the stagecoach in 1821, while the daily route was established in 1827. By 1871 mail was carried on the railroad.

As time progressed mail was brought to Butler six times a day!

Our pioneers faced a hardship known as loneliness. It prevailed at every homestead that advanced in the woods. Early trails established between cabins were imperative to help fill the void of human companionship. These paths were the basis of the roads that later carried stage coaches and today’s automobiles. Early post offices were established where a sufficient number of residents were located.

From the earliest days of the Rural Free Delivery service, America’s rural letter carriers provided their own transportation to make their daily rounds. Small metal heaters were used in cold winter months, to help keep them warm on their route. The side drawer would be opened and packed with hot coals that kept the heater operations. When new, these heaters were covered with carpet fabric and those riding in wagons could rest their feet on them to keep them warm and comfortable during their journey. Others placed bricks in their fireplace until they were hot, wrapped them in a piece of carpet to stay warm.

While the exact dates and locations of the post office sites in the Borough are not known, we have been able to locate some. Butler’s Post Office was first established in 1803, in Patrick Kelley’s tavern on the Diamond. We know in the early 1850s it was located at Main and North Streets with Joshua J Sedwick as the Postmaster.

Patrick Kelley, Jr’s tavern building at Main and E Cunningham Streets also was home to the Post Office for a time and by 1879 a frame post office was erected at 119 West Cunningham Street at the rear of Troutman’s Store. In 1888 it moved to 247 S Main Street where it stayed until 1903 when it moved into the new Butler County National Bank building. (The current home of PNC at Main and Jefferson.)

The United States Civil Service Commission announced a special examination to be held by its post-office board of examiners in Butler on July 7, 1900 at 9 a.m. for the positions of clerk and carrier in the post office. The examination consisted of spelling, arithmetic, letter-writing, penmanship, copying from plain copy, geography of the United States and reading addresses. Clerks had to be 18 years old and carriers, between 21 and 40 to serve.

Ten boroughs and villages had Post Offices in Butler County in 1832 and by 1916, 60 rural routes were served from the many post offices throughout our county.

Today, nearly half of the nation’s full and part time rural carriers still use their own vehicles to deliver the mail, serving more than 40 million customers. Rural routes range from 10 to 175 miles and have more than 400 stops.

Your ticket for the: Rural Free Delivery