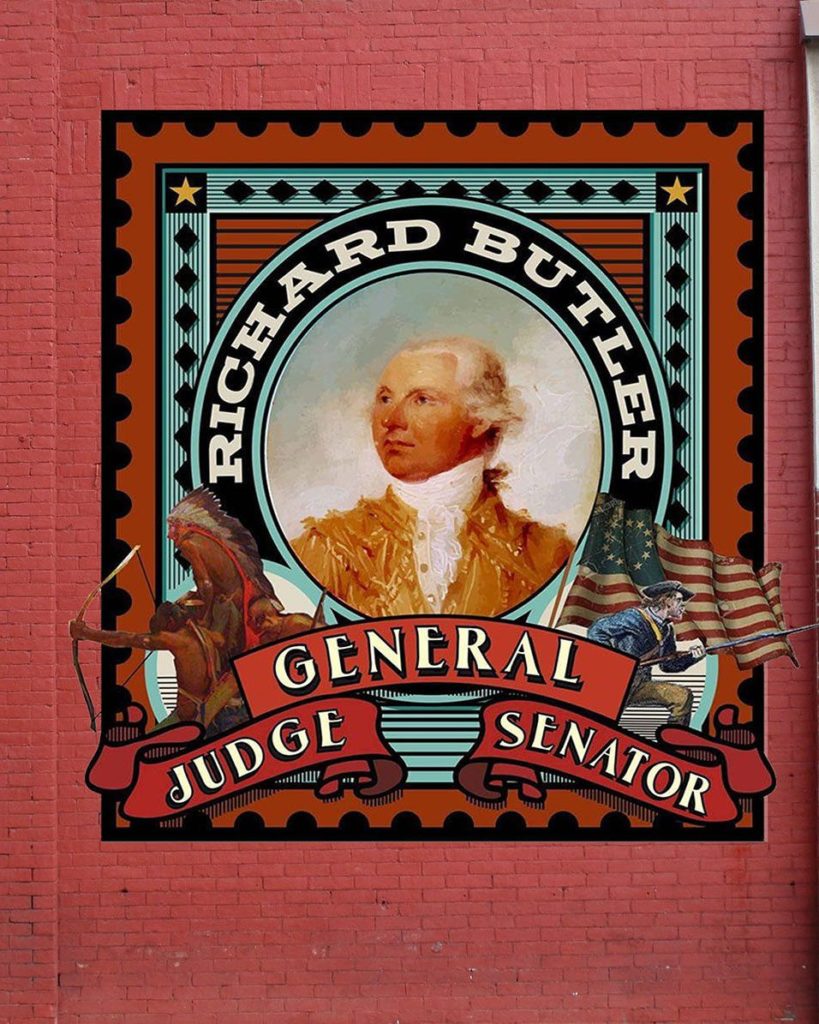 General Richard Butler is the namesake of the city and county of Butler. He was a native of Ireland and came from a large Anglo-Irish family. His parents were named Thomas and Eleanor. In 1748, when he was five years old, he and his family moved to Carlisle, Pennsylvania, where he was raised on a farm alongside his four brothers: Edward, Thomas Jr., Pierce, and William.

At twenty years old, Butler joined the local military regiment and was engaged in several colonial-era skirmishes; including the Battle of Bushy Run, part of Pontiac’s War, in 1763. He remained in the Western Pennsylvania area after this battle, becoming a tradesman selling goods obtained on the Indian frontier to colonists in settlements, primarily Pittsburgh and Chillicothe, Ohio. He occupied himself with this position until the outbreak of war between the American colonies and Great Britain, at which time he was pressed into service again.

He distinguished himself in the Revolutionary War as a colonel, serving with General George Washington in the Continental Army, alongside other luminaries such as the Marquis de Lafayette. Valley Forge, Monmouth, and Saratoga were some of the famous locations of America’s War for Independence where Butler saw action and witnessed America’s founding history.  He also was present at Yorktown in 1781, the deciding battle that ended the war in the American colonies’ favor. At the time the war concluded, he was promoted to brevet brigadier general.

After the war he became a large landowner in the Pittsburgh area, having been granted a thousand acres by the Commonwealth of Pennsylvania and six-hundred acres by the Continental Congress as part of his military pension, and also served in the political sphere, being named a judge of the Court of Common Pleas for the City of Pittsburgh, as well as a member of the Pennsylvania General Assembly, representing a district which covered Allegheny and Westmoreland Counties.

His service in the legislature was short-lived, however, because he found himself fighting for his flag yet again, this time as part of excursions into the Northwest Territory (present day Ohio, Michigan, Wisconsin, Illinois, Indiana, and Minnesota) to drive out Native American tribes. He obtained the rank of Major General, serving as second-in-command under General Arthur St. Clair. The expeditionary force, having already suffered several losses in the Indian Campaign, was not prepared for the type of warfare practiced by the Native Americans and suffered a crushing defeat at Fort Recovery, Ohio, in the Battle of Wabash River. Of the roughly one thousand, four hundred American troops who fought there, about nine-hundred were killed, wounded or missing. General Butler was one of those who lost his life in the battle.

Nine years later, the new county of Butler in Pennsylvania was named in the general’s honor. It was the first of three counties to be named as such, joined by counties in Ohio and Kentucky. General Butler never lived in the county, but probably had some associations with the county’s residents during his lifetime. Despite this, General Butler’s long and distinguished career in the military, business, and political sphere make him an honorable choice to be the inspiration behind the name of the city, township, and county of Butler.

Your ticket for the: General Richard Butler