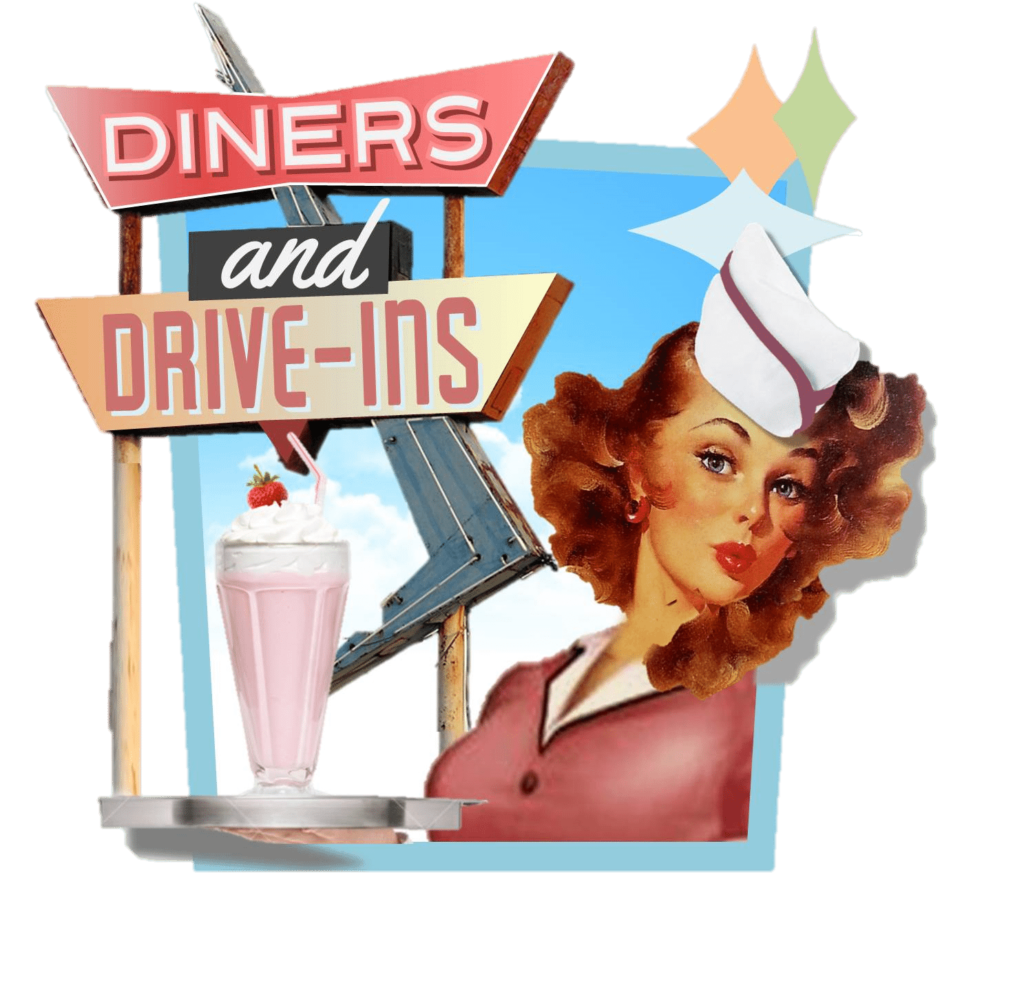 A drive-in is a type of restaurant where customers eat their meals without leaving their car. Customers would pull in to the parking lot and be greeted by carhops, who served burgers and fries on trays that clipped on to the car’s window.

The drive-in was an expression of American desires for speed, efficiency and, sometimes, laziness.   Diners wanted quick service, prompting carhops to take orders and shuttle food as quickly as possible, sometimes while wearing roller skates.   By the 1950s, drive-in owners had installed equipment, allowing parked customers to call in their orders.

The Idea of the drive-in is credited to J.G. Kirby who in 1921 opened a barbeque called the Pig Stand on the Dallas-Fort Worth Highway.  The idea appealed to the American desire for speed, and had a unique style.  The idea took off and grew throughout the roaring twenties reaching the height of its popularity in the 1950’s following World War Two.

The drive-in had a unique way of serving customers from food deliver to the very atmosphere of the restaurant itself.  The food usually consisted of Milkshakes, Hamburgers, and French fries which became a symbol of fifties Americana.  The food was as stated earlier served by carhops; who were usually women and sometimes men who took orders from and served the food to customers while they were in their cars. The uniform was anything from jeans and sneakers to the iconic white spotless dress and roller-skates, and what was worn depended on the image the owner wished to portray.

Butler had its share of drive-ins as well as diners for many years.  Spiro Keffalas opened diners on Route 8 south and Route 8 north of Butler.  The Terrace Drive-in was located on Route 8 South while the one on Route 8 North was well known as Chicken in a Basket.  These diners did a great business and Spiro offered good food, at a reasonable price, and was a good host to his customers.  After his death, his family could not agree on who should carry on the businesses so they locked the doors.   The buildings deteriorated and were eventually torn down.

An A & W Root Beer stand was located on New Castle Road, across from today’s Advanced Auto Parts Store.  Jim and Ann Geibel owned this stand and later sold the building to Burger Chef.

Bill Morgan started his Diner and Drive-in businesses with the purchase of Dight’s Diner on S. Washington Street in 1953, when he was 21 years old.  He then built the Morgan’s Wonder Boy Drive-in at Bon Aire which had the first Teletray Curb Service in Pennsylvania. Morgan's Wonder-Boy was opened on North Main Street Extension in 1966.  These drive-ins employed many people, as well as car hops and were a great place for young adults to hang out, enjoy some good food, and listen to music.  People who hung out at Morgan’s at Bon Aire still meet once a month for lunch at a local restaurant and have jackets that honor Morgan’s Drive-in.

Your ticket for the: Diners and Drive-Ins