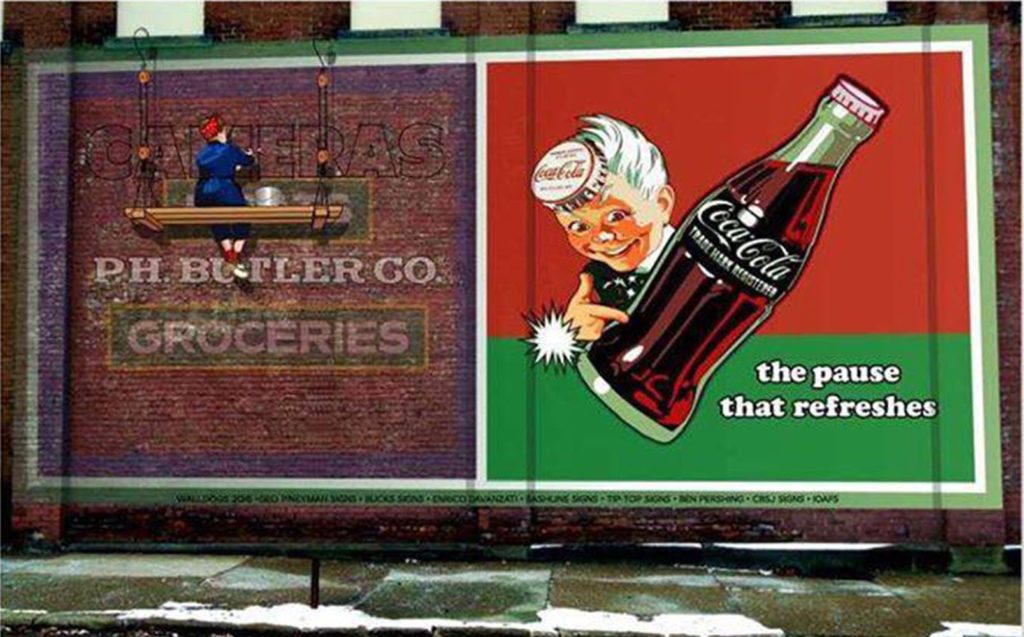 The drink that became known as Coca-Cola was invented in 1886 by Dr. John S. Pemberton.  Pemberton was a pharmacist in Atlanta, Georgia. Pemberton was a gifted medical chemist. Before he became infamous for Coca-Cola, Pemberton was the inventor of another popular drink, known as French Wine Coca.  French Wine Coca was very popular throughout the city of Atlanta and claimed to have many health benefits. However, 1886 Atlanta passed prohibition legislation, outlawing Pemberton’s French Wine Coca. Pemberton then set about creating a non-alcoholic version of his drink.  He developed a flavored-syrup and brought it to his local pharmacy. There the syrup was combined with carbonated water and the drink was born. Frank M. Robinson, the company accountant, deemed the drink “Coca-Cola” because he felt that the two Cs would work well in regard to advertising.  Coca-Cola witnessed great popularity and was deemed “the ideal temperance drink” by Pemberton. After Atlanta’s prohibition ended in 1887, Pemberton resumed production of his French Wine Cola, but it would never gain the same notoriety that Coca-Cola would come to possess.

Dr. Pemberton allowed his stake in the business to be purchased by several individuals.  The majority of the business was bought by Asa G. Candler, a businessman from Atlanta. Candler grew the distribution of Coca-Cola to exceed the city of Atlanta.  Candler incorporated the business as The Coca-Cola Company as a Georgia Corporation in 1892. Three years later, Candler announced that Coca-Cola was being consumed in every state and territory in the nation.

The soft drink originally contained cocaine, which was legal through the early years of the Twentieth Century.   Coca-Cola reportedly made the decision to remove cocaine from its recipe in 1903. The drug was replaced with more sugar and caffeine.  Candler was undoubtedly persuaded to remove the drug by arguments regarding the negative social and physical effects it had. After 1903, the drink continued to use coca but began to remove the chemical compound that produces cocaine.  The extraction process was not finalized until 1929, so up until that point the drink contained trace amounts of the drug.

Joseph Biedenharn was the first person to bottle the beverage, in the back of his soda fountain in Mississippi.  In 1899, three Tennessee businessmen secured the bottling rights from Candler for one dollar. Candler did not believe that bottling the beverage would be successful.  The three businessmen were Benjamin Thomas, Joseph Whitehead, and John Lupton. They established the basis of what is now Coca-Cola’s global bottling network. The first city to obtain a bottling contract with the company was Chattanooga, Tennessee.  Canada, Cuba, and Panama became the first three countries outside of the United States of America to have bottling operations.

In 1915, the Trustees of the Coca-Cola Bottling Association decided to spend up to five-hundred dollars to develop a unique Coca-Cola bottle.  The company wanted a “bottle so distinct that you would recognize it by feel in the dark or lying broken on the ground.” The company needed such a distinctive bottle in order to separate itself from the many other companies that attempted to copy the look and taste of Coca-Cola.

About ten glass companies throughout the United States of America were contacted and invited to submit a design for Coca-Cola’s bottle.  One of the companies that had been contacted was the Root Glass Company of Terre Haute, Indiana. The men from the Root company that worked on designing the battle included C.J. and William Root, Alexander Samuelson, Earl Dean, and Clyde Edwards.  Samuelson was an immigrant from Sweden and worked as the shop foreman. Samuelson assumed the lead of the Root Company’s design. He directed Dean and Edwards to go to the local library in order to research possible design inspirations. While there, the two men came across the cocoa bean.  They were enamored with its extended shape and distinctive ribs. The team collaborated to produce a design for a bottle. Dean sketched the bottle under Samuelson’s careful direction. The Root Glass company was granted a patent for the bottle, under Samuelson’s name, on November 16, 1915.

In 1916, a committee met to select the bottle designs put forth by the different companies.  The Root Glass Company’s bottle was selected hands down. The Root Glass Company entered a contract with The Coca-Cola Company that allowed six glass companies in the United States to produce their bottle.  The contract established that bottles were to be colored green. The name of the city in which the bottle was produced was to be placed on the bottom of the bottle. The bottle was to weigh at least 14.5 ounces.  They were filled with 6.5 ounces of Coca-Cola. As a result, each bottle weighed over a pound.

Edwin Howard, Jr. was the local architect who designed the plant that was constructed in 1940.  The new plant was located on First Street just off of Jefferson Street. It was one story high and 80 by 160 feet.  It was constructed out of brick and boasted stone trim. The new building contained state of the art bottling machinery and was erected to meet the increased demand for Coca-Cola in the area.

Your ticket for the: Coke Ad