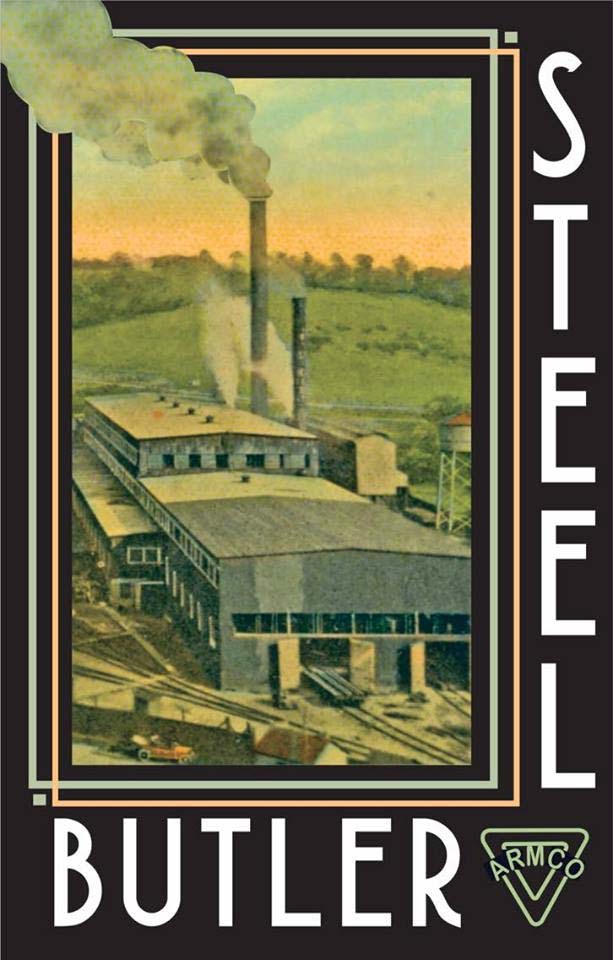 The American Rolling Mill Company, or Armco, was established by George M. Verity. Verity was the son of a Methodist circuit rider and found a successful career as the manager of a steel roofing business in Cincinnati. Verity’s goal was to own a steel mill in order to produce the steel needed for his roofing business.

Verity and a few business associates established Armco in Middletown, Ohio on July, 12 1900. The plant was deemed the Central Works. Verity worked to develop three separate processes of manufacturing in one plant that included: making the steel into ingots, reducing the ingots into smaller bars, and finally a process to make the material into a finished product.

As Armco endured its first years of operation, George Verity and his business partners learned that in order to succeed in the steel industry they needed to constantly innovate, concentrate on specialty steels and maintain a faithful and invested group of workers. These lessons greatly influenced the course of the company. The company’s venture into specialty steels began in 1908 when production of the Armco ingot iron began. The ingot iron gained infamy thanks to its unique attributes, such as its reluctance to rust.

On June 24, 1905, Armco expanded with the acquisition of the Muskingum Valley Steel Company of Zanesville, Ohio. The company grew again in 1921 when it established the Ashland Works in Ashland Kentucky. Armco next acquired the Butler Works before venturing west in 1930 with the addition of the Sheffield Steel Corporation in Kansas City Missouri. Armco eventually expanded to include the Houston Works, the Rustless Iron and Steel Corporation in Baltimore, Maryland, and a Sand Springs, Oklahoma plant.

The Armco Butler Works traces its history back to 1908 with the establishment of the Forged Steel Wheel Company. The Forged Steel Wheel Company produced railroad wheels, mainly for the Standard Steel Car Company in Butler. By 1916, the plant included ten open hearth furnaces. The plant was purchased by the Columbia Steel Company in the early 1920’s.
Armco’s Ashland Works developed the first successful continuous sheet rolling mill in 1924. The process, which created a better quality and a larger amount of steel than the previous method of rolling sheets by hand, was designed by John Tytus. While Tytus was developing his method, the Butler Works of Columbia Steel was also working on continuous rolling. The men in Butler were attempting to roll wider strips into coils, while Ashland rolled narrower sheets. Learning of the work being done in Butler, Armco notified the men at the Butler Works that they were probably violating patents possessed by Armco. Even though the Butler workers held patents of their own, they decided to sell their equipment and patents to Armco in 1927, in order to avoid costly litigation. Armco paid approximately $20,000,000.

With the addition of the Butler Works Armco obtained all of the rights to the revolutionary technique of continuous mills that would replace hand mills.

In the process of producing steel, the open hearth department was the first major operation, in which raw materials were melted and refined. The next step was carried out at the slab mill, where the ingots from the open hearth were rolled into slabs. The thickness of the slabs was reduced by several rolling steps; hot rolling, cold rolling, and temper rolling.
The Butler Works was not equipped with a blast furnace, needed to create low-cost commodity steel products, so the plant was developed into a center for the manufacturing of specialty steels. Butler embarked into the specialty steel market in 1930 with the production of two stainless steel coils. In 1936, the Butler plant used a hot dip process to establish the first continuous zinc-coating line. Three years later, the plant was the first to coat steel with aluminum. The industriousness of the people working at the Butler Works is credited for the many innovations that came out of the plant.

As the Great Depression raged, plant operations and schedules were hindered. Many employees were laid off for weeks at a time and worked only part time when they did work, but the plant endeavored to keep as many people employed as possible. The Armco Park, located fifteen miles north of Butler allowed provided a popular spot for families to find respite during such difficult times.

Armco operated under the guidelines of the, “Armco Spirit” which encouraged a strong relationship between the plant employees and management. George Verity is quoted as having said of the Armco Spirit that it “is, in fact, simply an exemplification of the highest standard of real American Citizenship.”

The Armco Spirit is credited for the impressive record of production that Armco established throughout the Second World War. The fact that Armco kept as many people as they could employed during the Great Depression meant that they were in the best position to ramp up production on the eve of World War II. During the war, the Butler Works produced steel for armor plate, forgings for ships, and specialty steel for various war time necessities.

As scrap metal became incredibly scarce, employees would spend hours scouring the area for metal that they could donate to the employee scrap drive and keep the plant operating at maximum capacity. They collected over 1,300,000 pounds of scrap.

Women were utilized in the war effort as well. The men who left to serve in the armed forces during the war left positions at the mill that needed filled. In order to do this, women from Armco families were recruited. In the recruiting process, Armco was careful not to take women from other essential war efforts.

The company also hosted war bond drives that were whole heartedly supported everyone working at the plant. Production records were continually set and broken throughout the war. A sign at the Main Gate of the plant boasted the words “Production Record Drive: Safety + Quality = More Productions.” The sign also showed the production of each department in order to increase competition between each department. Throughout the war management encouraged everyone to contribute ideas on how to increase production. Along with the increase in production, safety was always a priority at Armco, it was represented by the “Ironman” statue. On October 6, 1942, the Butler Works was honored with the Army-Navy “E” Award for Outstanding Plant Performance.

The end of World War II brought a period of prosperity for the nation as well as Butler Armco. In 1948, the Butler works began melting stainless steel with the introduction of #8 electric furnace that could hold sixty-tons.
On September 7, 1950 Armco celebrated its 50th anniversary at the old Butler Fair Grounds. The entire community was encouraged to attend the event. The mayor of Butler declared it “Armco Day.”

In 1956, the production of railroad wheels was relocated to a newly constructed facility on Bantam Avenue in the city of Butler.

During the post-war years the company sought to improve the lifestyle of its employees, the swimming hole at Armco Park was replaced with a swimming pool, in 1956. In 1957, the company purchased a golf course in Slippery Rock for the use of the Butler Works employees and families.

Throughout the 1950’s and 1960’s the Butler Works continued to expand, renovate, and innovate. A new Hot Mill was introduced in 1958. The Cold Rolling department was upgraded in 1959 and 1960. A stainless steel processing plant was established in 1959, located on the site of the Bantam Car Company.

In 1964, Project 600 was initiated at the Butler Works. Project 600 was an extensive program meant to improve the plant. It would cost $600,000,000 and last six years. The vice president of Armco stated that “Armco decided to launch the Butler Plant improvement program because of the long record of peaceful and productive relationships between the men and management of Butler works, the outstanding cooperation of the Butler community, and the greatly improved business climate in Pennsylvania.” The new Melt Shop was the main facet of the project. A continuous caster was installed in the Melt Shop, which helped to save the future of the Butler Works.

Starting the late 1960’s, the Butler Works won a series of Safety Awards. Armco continued to keep up with the latest steel production technologies. In 1977, the Butler Works witnessed the introduction of the Argon Oxygen Decarburization process, which melted and refined the steel.

The Slab Mill ceased operation in 1981. The opening of #3 Caster allowed the mill to produce all of the slab needed using the cheaper continuous casting method. The Slab Mill outlived the Open Hearth Department and the Wheel Works, which closed in 1970.

In 1986, Armco announced the addition of a cold rolling mill to the Butler plant. The addition would cost $60 million. Armco continued to develop the plant into the next decade, spending $30 million to upgrade one of the continuous casters. In the early 1990’s Armco was the largest steel producer in the United States of America.

In 1999, Armco announced a merger with AK Steel. Ironically, Armco was originally AK Steel’s parent company, but AK Steel had successfully grown to the point where it earned the most profit per ton when compared to its competitors. Together, the two companies were projected to share annual revenue of more than $4.1 billion and assets of $5.2 billion.

Your ticket for the: ARMCO Steel